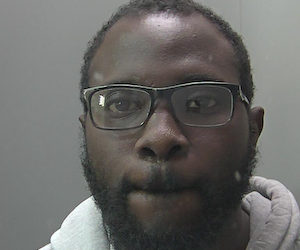 Omar Camara-Taborda, 33, was just finishing his shift and was driving in Newmarket Road on 25 March, 2020.

He approached the Barnwell Road roundabout but failed to see the cyclist ahead of him and knocked the 89-year-old off his bike.

The cyclist, Kenneth Turner, of Humberstone Road, Cambridge, was not wearing a helmet and was taken to hospital but died of his injuries the following day.

A post-mortem concluded he died of multiple traumatic injuries as a result of a road traffic collision.

When officers arrived, Camara-Taborda claimed he had left his driving licence at the delivery depot. He said he held a full Portuguese licence and was asked to produce this within seven days.

The following day he attended Thorpe Wood enquiry office in Peterborough where he produced a fraudulent Portuguese licence.

Further checks with the DVLA revealed that, in reality, he held a UK provisional licence and had lied to obtain insurance. He also failed to disclose a previous motoring conviction and penalty points.

Camara-Taborda was interviewed at the roadside and admitted he was the driver of the van but claimed he didn’t see the cyclist until he was in front of his van.

However, in police interview, he answered “no comment” to all questions.

Camara-Taborda, of Percival Street, Peterborough, stood trial at Peterborough Crown Court where he was found guilty of causing death by careless driving.

He later also admitted further charges of possessing a false identity document with intent and fraud.

He was sentenced at the same court yesterday (Thursday 5 May), where he was jailed for one year and one month. He was also disqualified from driving for two and a half years, with the requirement to take an extended retest and his fake licence forfeited and destroyed.

Detective Sergeant Mark Dollard, of the Beds, Cambs and Herts (BCH) Road Policing Unit, said: “It’s incredibly sad when we have to attend incidents where drivers have made a mistake resulting in tragedy.

“It is vital that people drive in a safe, considerate way to prevent awful instances like this in future.

“We attend these kinds of incidents far too often and many are completely avoidable.”