Catalytic Converter Thefts On The Rise In Cambs 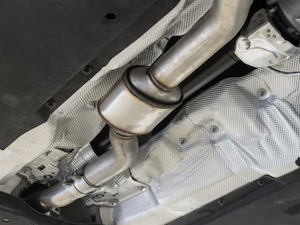 Thieves have been stealing catalytic converters from vehicles across Cambridgeshire at an average of more than two a day (between January and April 2021) and the force has seen a 49 per cent increase in reported incidents year on year (314 in 2019 to 470 in 2020).

Last week (19-25 April) the number of patrols on the road network were increased to focus on suspicious vehicles criminals are moving around in.

Vehicles were stopped on the M11 and in Peterborough for vehicle offences including no insurance.

The Rural Crime Team stopped a Sprinter van in Wood Walton and arrested the driver for burglary after discovering it was using false number plates and had been used for crimes in Lincolnshire.

The team were also involved in a pursuit with a Ford Mondeo which decamped in Dry Drayton. The offenders made off but stolen tools were recovered.

Throughout the week officers also visited scrap metal dealers to check stolen items were not being accepted and delivered postcards to residents offering crime prevention advice.

Toyotas and Hondas have been predominantly targeted but other vehicles including Lexus, Mercedes, Mazda and Volkswagen have also been singled out.

Catalytic converters are found in the exhaust system of every car and reduce the output of toxic gases and pollutants. Stealing them has become popular because they aren’t easily identifiable and can be sold on for the precious metals found inside them which can fetch between £50 and £200 a time.

Motorists can take the following precautions to help prevent them from becoming a victim:

Park your car in a garage if possible or in a lit area up against a fence/wall/other vehicle so it can’t be lifted
Avoid parking half-on-half-off the pavement
Consider a catalytic lock which a garage can install
Fit a tilt car alarm
Mark your catalytic converter
Install a video doorbell and/or driveway alarm that will alert you to suspicious activity.