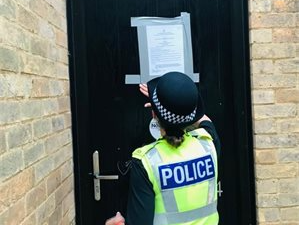 A Cambridge home has been issued with a closure order following recent anti-social behaviour.

The order was issued to 34 Manor Place after a successful application from Cambridge city neighbourhood officers to Cambridge Magistrates’ Court.

The action came as a result of frequent reports of anti-social behaviour, drug use and dealing and criminal activity.

A closure order was granted and the property will be closed for three months.

PC Hannah Flemington, from the Cambridge city neighbourhood team, said: “Thanks to vigilant members of the public raising concerns for the welfare of the occupant and reports of on-going anti-social we were able to submit an application to the court to safeguard the individual from further harm and prevent anyone visiting.

“We hope the order will also significantly reduce the impact on the local residents and allow them and their families to be in their homes without feeling intimidated.”

The closure order states the house be closed in accordance with the Anti-Social Behaviour and Policing Act 2014 and only permits access to the tenant and emergency services until 20 July. If anyone is found on the premises unlawfully they render themselves liable to arrest.