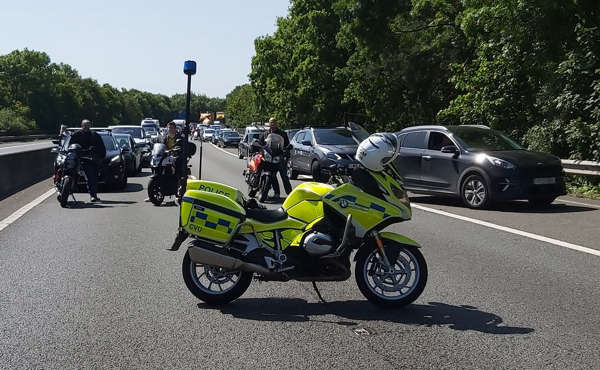 The stretch between junctions 8 and 9 was shut for more than eight hours following the collision on Saturday morning.

One  man has sadly died following a collision on the M11 between junctions 8 for Bishop's Stortford and 9 for Newmarket.

Emergency services were called shortly after 10.05am to the southbound carriageway.

The driver of a small vehicle transporter, which was carrying a white van, became trapped after the transporter overturned.

Paramedics tended to the man but he died at the scene.

The northbound side of the M11 reopened earlier, but the southbound side remained closed for a number of hours to allow forensic examination work Ito be carried out and a diesel spill cleared.

An Essex Police spokesman said, "Thank you to drivers for your patience throughout the day.

"Witnesses and anyone with dash cam footage of the collision are asked to email CollisionAppeal@essex.pnn.police.uk"

The crash led to huge delays for drivers with some being stuck on the motorway for more than five hours and some travellers bound for Stansted Airport seen walking along the hard shoulder with their suitcases.