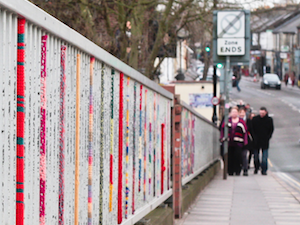 The trial closure of Mill Road bridge in Cambridge to all traffic except buses, cyclists and pedestrians will continue into the summer.

In order to promote cycling and walking during the COVID-19 pandemic, the bridge has been closed to private vehicles traffic since June 2020. Red and white ‘build outs’ have also been in place along Mill Road to help people socially distance when out and about.

A consultation on the trial closure of the bridge ran from June through to December last year with representations invited in writing to the Council during these six months. A survey to gather more feedback was open for six weeks during November and December.

The survey received over 3,500 responses with more feedback submitted by letter and email. The survey asked respondents whether they were in favour or against the bridge closure, what they would like to happen next and for their thoughts about the ‘build outs’.

Following expert advice from the Consultation Institute it has been decided that whilst the general comments made via the survey can be analysed, it is not possible to robustly analyse the quantitative data gathered about the bridge closure due to the extent of the issue.

Unfortunately, the extra work caused by these irregularities means that the project can no longer be reviewed at committee in March. The Mill Road bridge project will now be reviewed by the Highways and Transport Committee in June, following the May local government elections.

Councillor Mark Howell, Cambridgeshire County Council’s Vice-Chair of the Highways and Transport Committee said: “We haven’t encountered actions like this on this scale within a consultation. We’ve followed best practice and ensured the survey was available to all who wanted to let us know their feedback on the changes to Mill Road.

“It was great to see so many people engaging and letting us know their thoughts. So it’s particularly disappointing that a minority of individuals have chosen to act in this way.

“We’ve taken advice and believe that the best thing to do is for the committee to review the written responses we’ve received via email and letter throughout the six months consultation as well as the comments put forward in the open response areas of the survey.”