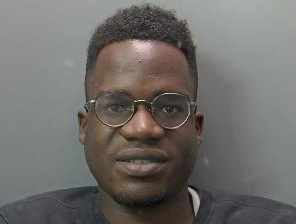 A drug dealer who savagely attacked and murdered a man after he was short changed by his daughter has been jailed for 15 years.

The drug deal took place and the woman handed him the money before getting back into a car driven by her friend and returning home to Offord Cluny.

Later that same night the father of the woman who had underpaid Beresford, Robert Duquemin, heard a buzzer at his door in Percy Green Place, Huntingdon.

He opened the door thinking it was his daughter but, shortly afterwards, a man with his face covered attacked him but didn’t say a word.

Mr Duquemin was punched to the head and body during the attack. The severity of the punches forced him against his neighbour’s doorframe and caused him to fall to the floor.

His daughter told officers that Beresford knew where her father, Mr Duquemin, lived and believed that Beresford attacked him as revenge for the drug deal gone wrong.

The hunt for Beresford led officers to his girlfriend Aiste Paulauskaite’s home in Spring Close, Huntingdon. A search of the house revealed more than £5,000 in cash, drugs and drug paraphernalia. A damp t-shirt and pair of gloves were also found in the washing machine.

Both were sent off for forensic testing and blood which had soaked onto the gloves was found to be Mr Duquemin’s.

Beresford was arrested shortly after midnight on 7 October but answered “no comment” to the majority questions asked by officers.

Paulauskaite was arrested and interviewed, where she admitted picking Beresford up on 5 October and driving him to and away from Mr Duquemin’s road, but denied knowing what he had done whilst there. She also allowed police access to her old phone which had a SIM card belonging to Beresford in and revealed evidence of drug dealing.

A further phone seized from Beresford gave a bread trail of his movements on the day Mr Duquemin was attacked, including placing him at the man’s home and carrying out further drug deals afterwards.

Investigations also revealed that on 6 October, the day after the drug deal and the attack, Beresford had used the phone to look up Mr Duquemin’s family on Facebook and also searched for defence solicitors and the phrase ‘Huntingdonshire police’.

Mr Duquemin, 53, died at a house in Ringwood Close, Bury, Ramsey, on 10 October as a result of the attack five days earlier. A postmortem concluded he died of a ruptured spleen as a result of blunt force trauma.

Beresford was interviewed following Mr Duquemin’s death and answered “no comment” to all questions, apart from on one occasion. When told about the gloves found in his girlfriend’s washing machine he visibly reacted, looked uncomfortable and said: “They weren’t washed”.

Beresford and Paulauskaite stood trial at Peterborough Crown Court from 20 September, and on 18 October jurors delivered their verdicts.

Beresford was found guilty of murder and had previously pleaded guilty to supplying class A and B drugs.

Paulauskaite, 21, was found guilty of assisting an offender. She had previously admitted being concerned in the supply of class A and B drugs, and perverting the course of justice.

Both were sentenced at the same court today (15 November) where Beresford was handed a total of 15 years in prison and Paulauskaite was sentenced to two years behind bars.

Sentencing, Judge Sean Enright told Beresford that he had been an “established” drug dealer for many years who had a “flourishing” drugs business.

He added: “Your victim was a frail man, at nine stone and 5 ft 4, and with mental health difficulties. You knew that, and you knew he lived alone.”

Sentencing Paulauskaite, Judge Enright said he knew Beresford had been her first boyfriend and that he had involved her in his drugs business by asking for lifts, storing drugs at her home and “normalising” this behaviour.

Judge Enright highlighted that Paulauskaite thought Beresford had only inflicted ABH level injuries when she drove him away from the attack, and that he had seen what effect seeing the photos of Mr Duquemin’s injuries during the course of the trial had had on her.

He told her that he did not accept she had washed Beresford’s clothing, and questioned whether this was in fact Beresford himself. Despite all of the above, he said that only an immediate custodial sentence was appropriate.

Judge Enright also commended Detective Sergeant Simon Oldfield and DC Colin Richardson for their work during the course of the murder investigation.