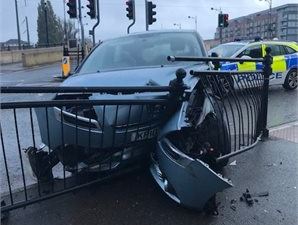 A man who burgled a Peterborough school then stole a car and crashed it into railings has been handed more than a year in prison.

David Barry, 45, of Towler Street, Peterborough, sneaked into The Thomas Deacon’s Academy, in Queens Gardens, between 2.45pm and 4.15pm on 18 September.

He entered the exam block through an open door and left a few minutes later with a large black backpack.

In the backpack was an Apple MacBook worth £1000, a laptop lead, a work phone and a driver’s licence. An HP laptop was also stolen from the exam hall.

The school’s CCTV was checked and showed a man, later identified as Barry, entering the block at 3.13pm. He was walking with a slight limp and one hospital crutch.

The footage captured him leaving less than a minute later. CCTV stills were circulated and Barry was identified by a police officer.

The stolen driving licence was returned to the owner after it was found dumped in Queensgate.

Two months later, at about 2.30pm on 3 October, Barry got into a Peugeot in St Mark’s Street, Peterborough, and drove off.

He turned right into Church Walk, then left onto Lincoln Road and then right again onto Bridge Street.

At 6.40am the following morning police were called after Barry crashed the same car into some railings before fleeing along London Road towards Peterborough city centre.

Police arrested Barry, who admitted being the driver of the car but failed to provide a specimen for analysis after officers suspected him of drink or drug driving.

He was arrested on suspicion of being in charge of a motor vehicle whilst unfit through drink or drugs and taken into custody. He was searched and officers discovered a small wrap of crack cocaine.

At 9.35pm Barry spat at a custody sergeant who told him he would shortly be going to hospital for medical treatment.

Checks were carried out which established Barry had no insurance or driving licence, and the car he had crashed was also stolen.

Barry refused to be interviewed by police but later pleaded guilty to possessing class A drugs, aggravated vehicle taking, failing to provide a specimen for analysis, driving without a licence, driving without insurance, burglary and assault by beating of an emergency worker.

At Peterborough Crown Court, Barry was handed a total of 14 months in prison.