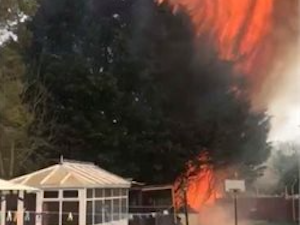 A serial arsonist who plagued an East-Cambridgeshire neighbourhood tried to blame his actions on a fictional twin brother.

Paul Fiebig, 23, lit a series of six fires in Soham between April and May of last year.

The fires, which ranged in severity from bushes and hedgerows to 40ft conifer trees, saw neighbours panic as their gardens were engulfed in flames.

Several witnesses spotted Fiebig at the scene of the blazes and commented on his calm demeanour, despite the potentially dangerous situation.

Fiebig was also spotted by an off-duty officer, who noticed him constantly looking over his shoulder and acting suspiciously, moments before a fire broke out.

Fiebig was arrested on suspicion of arson and when questioned, claimed the fires must have been the work of his identical twin brother. Officers investigating later confirmed Fiebig was not an identical twin.

Fiebig, of Queensway, Soham admitted six counts of arson and was sentenced to two years in prison, suspended for two years.

PC Guy Spencer said: “The frequency and severity of Fiebig’s antics were staggering. He could easily have caused serious injury, or perhaps worse.

“I would like to thank the members of the public who reported the incident to officers, their quick-thinking allowed us to bring Fiebig to justice.”