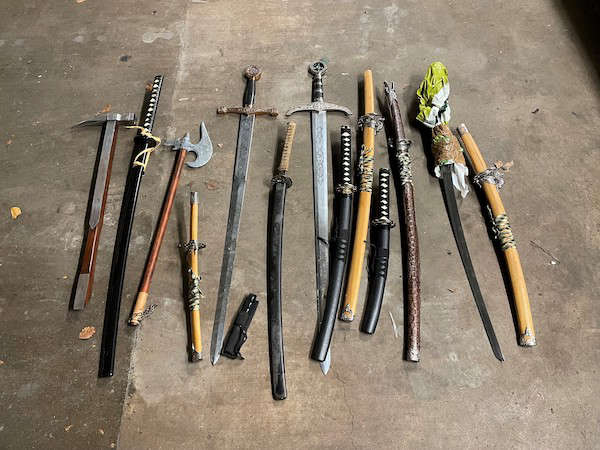 More than 50 weapons including swords, knuckle dusters and batons were handed into police as part of an amnesty.

The amnesty allowed people to hand in knives and recently banned weapons to police without fear of prosecution. The 56 items handed in included 34 knives and 14 swords.

In July this year the Offensive Weapons Act was updated, making items such as knuckledusters, telescopic truncheons, curved swords and zombie knives illegal to own even if kept on private property. Previously, weapons such as these were only illegal when carried in public.

The amnesty formed part of the national ‘Operation Sceptre’ week of action. A broad range of policing activity took place during the week, including a heightened police presence in ‘hotspot’ areas, targeting people who are believed to carry weapons, engagement with schools and working with retailers who sell knives, as well as completing test purchases. The week was supported by officers, Specials and police cadets.

The week-long initiative was part of ‘Operation Guardian’ – the Constabulary’s ongoing strategy to combat knife crime in the county.

Possession of an article with a blade or point offences decreased by 17% in Cambridgeshire in 2020/21 compared to figures for the previous financial year.

Inspector Matt Snow said: “I’d like to thank everyone who handed in weapons to us last week. By doing so you have helped to make our communities safer.

“We wanted to give people an opportunity to hand in weapons that have now been made illegal to own. I’m pleased people have taken that opportunity and that these items will now be disposed of safely.

“This week of action was all part of our ongoing efforts to tackle crime involving weapons in the county as we aim to make Cambridgeshire an even safer place.”