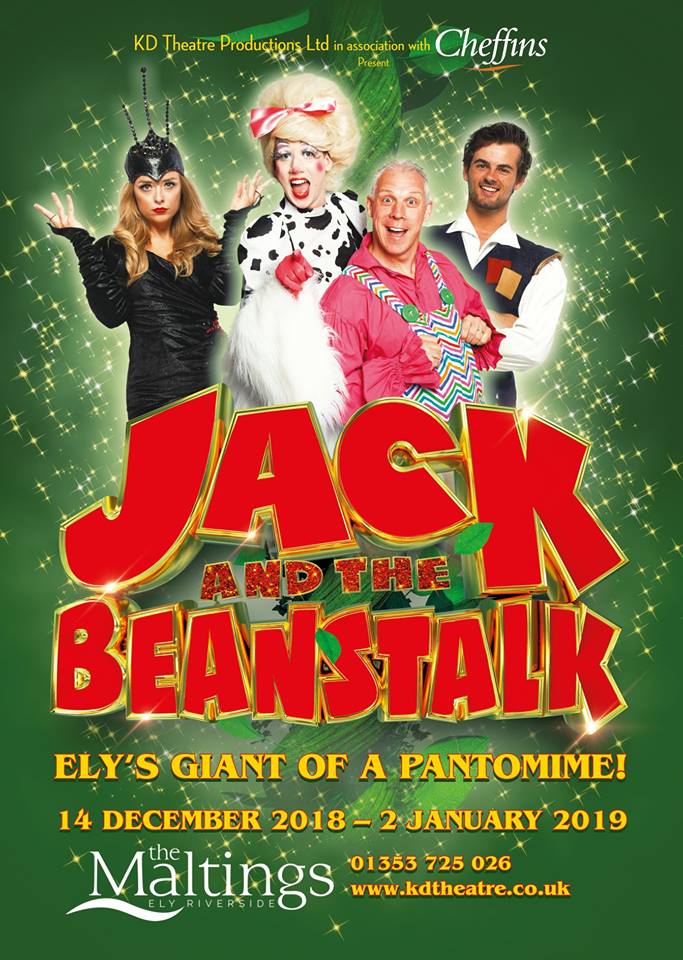 Win 5 tickets to the opening night of Ely's big panto this year... Jack & The Beanstalk, thanks to KD Productions and The Maltings, Ely.

Audience members can expect the usual fun and frolics of The Maltings pantomime plus lots more surprises! Featuring a Live Band, Spectacular sets and lavish costumes, there really is no better way to kick start your festive activites.

Terry Gauci returns by popular demand as Handyman Harry and Daniel Bell (Writer/Director) returns to the stage to play Dame Trott. Ely favourites Gregory Hazel and Lucinda Withers return to play Spirit of the Beans and Baroness Blunderbore alongside a cast of talented professional performers. The cast will also be joined by local young children from KD Academy.

From humble beginnings, Katherine Hickmott and Daniel Bell (the producers and founders of KD) and their team work tirelessly throughout the year to ensure Ely gets the highest quality and most enjoyable pantomime.

Jack & The Beanstalk, with on Star Radio – Terms and Conditions

1. The following rules (“Specific Rules”) together with the general competition terms & conditions (which can be found at http://www.starradioonline.com/terms-and-conditions/)(the “Competition Terms and Conditions”) of Star Radio as defined in the Competition Terms & Conditions apply to the ‘Jack & The Beanstalk’ competition ("the Competition") which will run on 12th December during the Breakfast Show (“the Duration”).  The "Radio Station" is Star Radio (Cambridgeshire).

2. Anyone who enters the Competition (an “Entrant”) will be deemed to have read and accepted these Specific Rules and the Competition Terms and Conditions and will be bound by them.

Details of the Competition:

3. To enter the competition, the entrant must listen to Star’s More Music Breakfast on Wednesday 12th December 2018 and answer the question the presenter reads out on air.

4. The entrant must text STAR and their answer (STAR + [ANSWER]) to 81400. Texts are charged at standard network rates. A maximum total of 4 entrants with the correct answer will be selected at random after the competition is closed. Entry opening and closing times will be announced on air.

7. Multiple entries are not permitted

9. There is no alternative prize available.

10. Tickets will not be sent out – your name and address details will be at the Box Office for verification upon your arrival.

11. Star Radio reserves the right to change or amend these rules at any time.