Cambridgeshire Officer Reflects On Day “beyond all expectations” 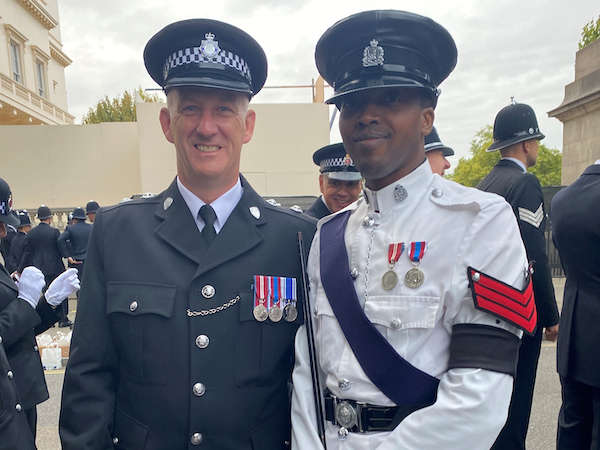 Inspector Matt Snow who represented Cambridgeshire Constabulary at the funeral of Her Majesty the Queen in London has spoken of a day “beyond all expectations”.

Inspector Snow joined officers from across the UK, as well as overseas territories such as the Falkland Islands and British Virgin Islands, along the procession route.

He arrived at Lambeth Headquarters at 4.30am to meet the other officers involved, before taking up his posting near Buckingham Palace.

Inspector Snow said: “It was an incredible privilege and a great honour to be asked to represent the constabulary on the day. It really was the proudest moment of my career.

“The day was beyond all my expectations, with huge numbers of people lining the route and an incredible atmosphere.

“As we walked around the crowds were cheering and shouting words of thanks to us for our service which was nice.

“Some time after the procession had gone by the empty gun carriage returned, this time without the coffin, which was a really sombre moment.

“It was good to meet other officers from all over the UK and overseas territories (Inspector Snow is pictured with a colleague from Montserrat) as well. I wasn’t expecting the officers from overseas, so it was great to speak to them.”