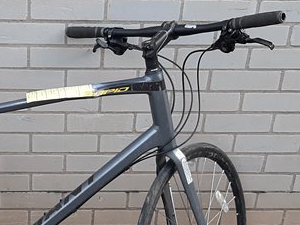 A Cambridge bike thief has been sentenced after he was caught in the act on CCTV.

Ricky Green, of Victoria Road, claimed he took his victim’s Pinnacle Hybrid bike on 7 November (2020) worth more than £600 because a ‘friend’ had asked him to collect it.

Green was captured on CCTV and identified by police and arrested.

At Cambridge Crown Court he was sentenced to a 12 month community order and must carry out 120 hours unpaid work after pleading guilty to bike theft and breaching a suspended sentence.

PC Wadsworth said: “We recognise that cycle theft remains a priority for residents of and visitors to Cambridge city and we’re committed to catching those responsible and putting them before the courts.

“We’re also working alongside Camcycle to encourage those who love their bikes to ‘lock it and log it’ to keep their property safe.”