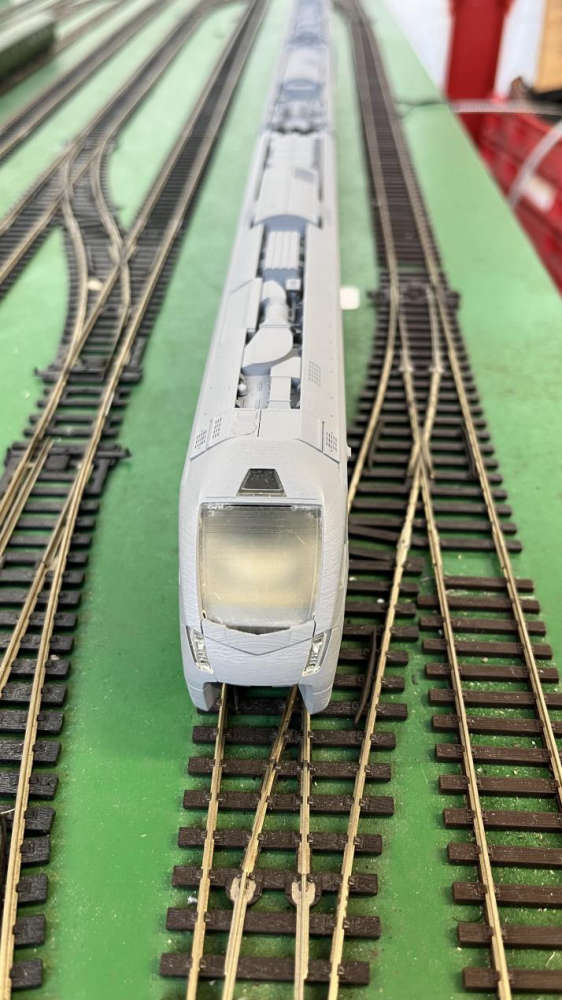 Hornby is making both versions of the full-size train – the three-carriage and four carriage trains, which run on Greater Anglia’s regional routes in Cambridgeshire.

Hornby started work on the model Greater Anglia train in 2021, when they obtained blueprints of the full-size trains from Swiss train manufacturer, Stadler. They then visited Greater Anglia’s Crown Point depot in Norwich in June 2021 to photograph and take measurements of the Class 755 trains, looking at details on top of the train, underneath it and inside it.

Steve Merry, senior product designer at Hornby Hobbies, set to work designing a 1:76 scale model of the trains at Hornby HQ in Margate using CAD (Computer Aided Design). He spent months working on all the detail – from the arrangements on the roof such as fans, exhausts, GSM aerials, electric cabling and the pantograph to the toilet tanks on the undercarriage of the train.

The train’s large picture windows – ideal for views of the East Anglian countryside in the full-size version – presented a few challenges to Steve as not only did he have to pay attention to the train’s interiors, adding seating, tables and even passenger information screens, but it made it more difficult to hide the motors which power the model train.

A 3-D print out was made of the train so that Steve could run it on a test track at Hornby HQ to make sure that his design worked. During the testing phase, he discovered problems with the small motor and the articulated bogie – where the wheels are mounted on the model train. He then spent some time modifying the design – and testing his modifications until he was happy that the model would be reliable. This included designing a new bigger motor and trying to hide it from people looking into the model train through the model windows and re-designing part of the bogie.

Chris Reilly, sound and electronics engineer at Hornby Hobbies, visited Greater Anglia in October 2022 to record all the sounds on the trains, both at the depot and by taking a couple of rides on them. He recorded everything from the horn and the diesel engine to automated announcements on board and a conductor going through the train asking for tickets. The sounds will play through a tiny speaker hidden in the model trains.

After over 18 months of working on the design, the train is ready to be made by Hornby’s manufacturer in China and should be in the shops in 2023. The models are available to pre-order, with prices starting from £362.99.

Martin Beable, Greater Anglia engineering director, said: “It’s fascinating to see how much work goes into producing a scale model of our new trains. Just as we have worked hard and taken time to make sure the new trains are reliable and the highest possible standard – the team at Hornby has obviously approached their project with the same level of dedication and determination to produce fantastic new trains, as we have.”

Simon Kohler, marketing and product development director at Hornby Hobbies, said: “Greater Anglia’s Stadler Class 755 trains are a radical design for the UK railway which we understand have caused a lot of excitement among rail passengers in East Anglia.

“It’s a radical design for us too and one we were very excited to reproduce in 1:76 scale. We took our 3D model to a railway model exhibition and it got the full thumbs up. The railway modellers community are excited about being able to get them running on their tracks.

“We take great care with every model we produce. Railway model enthusiasts are an exacting community who expect our models to be exact scale reproductions of trains – down to the number of fans on top of a train and rivets on the bodywork.”