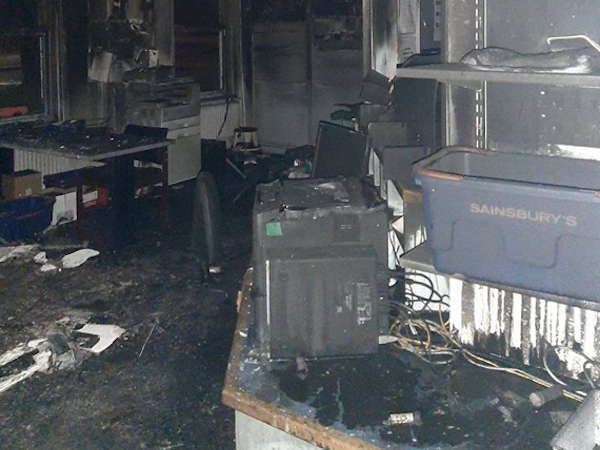 Emergency services were called to the practice in Haggis Gap, Fulbourn, in the early hours of 27 July after witnesses, who heard the alarm, saw Naylor throw something inside the surgery before fleeing the scene as the fire erupted within.

A fire investigation revealed Naylor had poured or sprayed two bottles of washing up liquid which were filled with an accelerant inside the building.

CCTV footage revealed he had walked to a nearby petrol station just hours before and filled up a petrol cannister which he took home and decanted into the smaller bottles.

He was arrested at his home in Haggis Gap, Fulbourn, on the morning of 27 July. He swung a metal pole at officers before telling them he had made the ‘petrol bombs to burn down the surgery’.

The 50-year-old had previously made threats to burn the surgery down if he wasn’t given the ‘medication’.

At Cambridge Crown Court Naylor was given an indefinite hospital order after previously pleading guilty to arson and threatening to destroy or damage property.

Detective Constable Sarah Longbottom, who investigated, said: “Naylor targeted a busy doctor’s surgery in the height of a pandemic. The surgery was one of the main hubs for issuing Covid vaccines in the area. The surgery was extensively damaged throughout and as a result of his actions, doctors, staff and patients were unable to use the surgery and had to be transferred elsewhere for a prolonged period of time.”

Detective Constable Ali Kent, who also investigated, added: “Due to the potential danger posed by Naylor, the Judge has given him an indefinite hospital order as well as adding a section 41 order which means the Ministry of Justice will be required to authorise his release.”