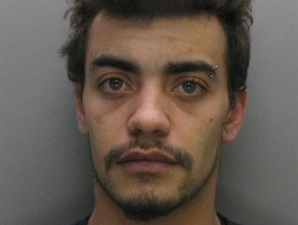 A Cambridge man caught with class A drugs, knuckle dusters and a baton has been jailed for more than three years.

The 23-year-old first came to officer’s attention in September 2017 when he was seen driving using a mobile phone. When pulled over he smelt of cannabis and a search recovered cannabis, cocaine, an extendable baton, knuckle duster and hand lock knife.

In November 2017 he was stopped for driving erratically in Orchard Park and found to be smoking cannabis but made off from officers.

Crowe was arrested again in January 2018 after being caught speeding in Arbury Road. Another knuckle duster, cocaine and cannabis were found.

PC Dan Scott said: “Crowe is a dangerous and prolific drug dealer who carried weapons on a daily basis. The county will be a safer place knowing that he is behind bars.

“We will continue to crack down on those associated with the sale of drugs in our county and urge members of the public to help us by reporting any suspicious activity online.”