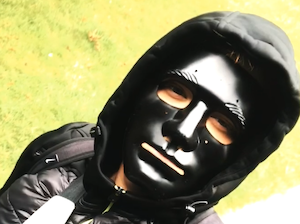 17-year-old from Peterborough, who cannot be named for legal reasons, admitted being involved in four robberies and an assault in Peterborough in June and October last year.

On 30 June, the first victim – a 19-year-old man – was cycling over the A47 footbridge on Fulbridge Road at about 4.30pm when he was approached from behind by the boy and two others, two of them wearing “intimidating” black plastic masks and one wearing a balaclava.

The boys demanded the victim handed over his bike while one of them showed him a large gold ring on his finger, stating he would use it to hurt him if he did not comply.

The same boy then began counting down from three and punched the victim in the face, knocking the man’s glasses off, before they made off with the bike.

Two hours later, the boys targeted a 17-year-old boy and two of his friends in Henry Penn Walk.

All with their faces covered with masks, the boys approached the group as they sat listening to music by the river. One of them tried to take an e-scooter and shouted “get the shivs out the bush” to the others, as the victim tried to take hold of it.

Fearing the boys had hidden weapons in the bush, the victim handed over his scooter and the group made off.

The 17-year-old boy pleaded guilty to two counts of robbery and appeared at Huntingdon Youth Court on Wednesday, 1 June, where he was sentenced to a 12-month youth rehabilitation order consisting of him being made to wear an electronic tag, having a curfew between 9pm and 7am for the next three months and must reside at a specified address in Norwich.

He must also carry out 40 hours of unpaid work, pay £20 compensation to each victim, not enter Peterborough for the next six months, nor contact 12 named people.

A second 17-year-old boy also admitted two counts of robbery and appeared at the same court on Wednesday (8 June), where he was handed a 12-month youth referral order which is the first community sentence given to most first-time young offenders, requiring them to attend a youth offender panel made up of two members of the local community and an advisor from a youth offending team, where they will agree a contract of certain commitments.

He was also ordered to pay £50 compensation to each victim.

The third boy, also 17, was charged with two counts of robbery, however the charges were later dropped at court.

Months later, on 18 October, the 17-year-old boy was again involved with a group of people who robbed a 14-year-old boy of his e-scooter in Bourges Boulevard.

The victim was pushed to the ground and had what he thought was a gun pointed at him, before the group made off for their next victims in Cathedral Square.

They came across two boys, aged 16 and 17, who were sat on the steps at the Guild Hall Monument and began taunting them by shouting abuse before the attack became physical, stealing one of the boys’ wallets and portable speakers.

Armed officers were deployed following the two reports of robberies and arrested the group in the city centre.

The 17-year-old boy admitted two further counts of robbery, assault and being in possession of an imitation firearm. He was sentenced for these offences alongside the June robberies, with the addition of £50 compensation to be paid to each of the victims.

Jordan Opokubaah, 18, of Fulbridge Road, Peterborough, admitted the same offences. He appeared in court in January and was handed a six-month detention and training order.

A 16-year-old boy also admitted the same offences, as well as being in possession of a knife. In February this year he was sentenced to a12-month youth referral order and ordered to pay £60 compensation to each victim.

Two girls aged 12 and 14 at the time, and a 16-year-old boy were also charged with the same offences, but these were later dropped at court.